It always amazes me how quickly our technology is evolving. Take laptop computers for example; twenty-some-odd years ago these devices were a luxury, used only by the most tech savvy and wealthy business people and professionals. If you owned a laptop you were somehow exceptional. Today, NOT owning a laptop makes you a bit of an oddity.

We see laptops everywhere these days: on the train, the bus, heck even the occasional homeless guy by the side of the road can be seen checking his email from time to time thanks to free wireless access points.

Most prominently though, I would have to say, is the splash that laptops have been making at schools and universities. When I first began my university degree, I remember there being two of three people out of a class of 60 or so who had laptops with them. They all sat in the back row, so that their power cables could reach the outlets in the back wall. By the time I was graduating, three and a half years later, the number of students with laptops had jumped to around 20 in every classroom. Not only were there more of them, but thanks to advances in battery life and power saving modes, they weren’t all forced to the back corners of the room.

I feel that it is safe to say that laptop computers have rightfully inherited the title of “notebook”. Gone are the old spiral bound notebooks, in are the near-silent keyboards and 11″ screens.

So, how much have laptops themselves changed over the years? Quite a bit.

The first laptop that I remember ever seeing in person belonged to the mother of a friend of mine. She worked as an artist and graphic designer in the 90s and owned an IBM Thinkpad 755, which at the time was the cream of the portable computer crop. With a powerful Pentium processor and expandable up to 8 mb of standard memory, this computer meant business. As well, thanks to the inclusion of a built in CD-ROM this bad boy pretty much blew the old Macintosh Powerbook series laptops out of the water.

The best part of the Thinkpad 755, however, would have to have been the fact that my friend managed to install X-Com on it. Needless to say, our addiction to battling the alien invasion force did sometimes get in the way of his mother’s plans to actually work on the computer.

Swing over to today, and things are noticeably different. Though I’ve owned a wide variety of computers since the 90s, the first laptop I ever purchased was a Dell Studio 1737 in 2009. Coming with a just above $1500 price tag for a fully loaded desktop replacement laptop, the price I paid was really quite comparable to what someone would have had to drop back in the 1990s for a top of the line Thinkpad. 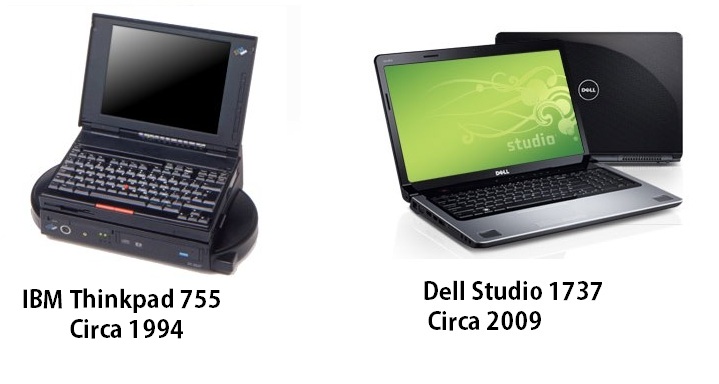 Luckily though, my laptop came with noticeably more features and power than the IBMs of old. Wiht 6 gigs of ram, a top-notch dual-core processor, 320 gigs of hard drive space and (gasp!) a CD-ROM that I never use. As well, despite being several inches wider than the old thinkpads, my computer somehow manages to weight less, and take up less room under my arm than the boxy designs of days long gone by.

So, while I am quite pleased with my laptop, the sad thing is that it is already starting to loose its edge, and I’ve had it for less than two years. Nowadays I can easily get a computer with twice the power for the same cost or a little less. That Thinkpad from the 1990s probably could have had a good four years or so on it before it started to show any wear.

My, how things move ahead quickly these days.